"Not as cute, but more useful."

Endo-02 is a unlockable character in Fnaf World.

Endo-02 is the rarely seen 11th animatronic from FNaF 2. He is considered a "rare occurrence" in the game and has no effect on the game itself despite having an AI.

Endo-02 is one of a handful of playable characters in FNaF World to not have been a direct antagonist in the original game series. The others are Endo-01, JJ, Shadow Freddy, RXQ (AKA Shadow Bonnie), Crying Child, the Paperpals, Fredbear, Spring Bonnie, and Endoplush.

His appearance is pretty simple and a lot different from Adventure Endo-01. He has teal-green eyes and 4 fingers along with 2 toes like all other endo's. 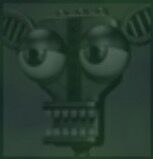 Endo-02 in the "Merry Christmas!" teaser.