Fredbear is a unlockable character and guide to the player in FNaF World.

Glitched Fredbear (Also known as Sprite Fredbear) is an easter egg and the main guide to obtaining the "Clock Ending".

Fredbear is a golden-colored variant of Freddy Fazbear wearing a purple bowtie, and a top hat, appearing as a smaller version of his counterpart from the Five Nights at Freddy's 4 minigames. Also if one looks closely, he lacks some joints, such as his kneepads, and unlike his core series counterpart he has two buttons and only has four fingers.

NPC Fredbear gives "quests" to the player. Like the other playable characters, Fredbear has three attacks -

A strategy that can be used is to use Mega Bite to deal massive amounts of damage to a singular target while applying Regen Song if you sense a big attack coming or simply need to heal up.Mimic Ball is perfect if there is a character that has a skill that can do high amounts of damage.

On the final teaser with the other characters.

On the title screen with other characters.

What happens if two Fredbears collide.

Glitching animation (only appears if the player's party leader is also Fredbear).

Fredbear's legs (happens after both Fredbears blow up due to the Universe ending).

Fredbear's legs as a trophy. 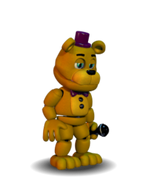 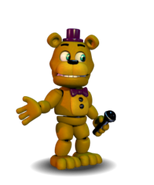 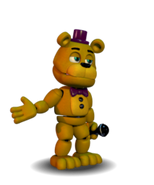 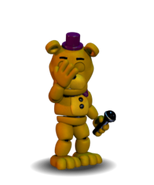 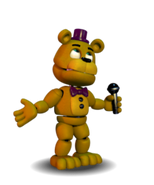 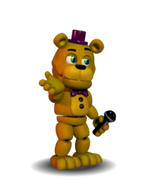 Fredbear on the Party Creation (locked).

Fredbear in the "Merry Christmas!" teaser.

Fredbear in the teaser for Update 2.

Community content is available under CC-BY-SA unless otherwise noted.