Were you looking for Nightmare's counterparts?: Adventure Nightmare Fredbear or Adventure Shadow Freddy? Or possibly, any other Adventure Animatronic from the "Nightmare" species?

Adventure Nightmare closely resembles Nightmare Fredbear as both use the same models, except that Nightmare has black fur, red eyes, and golden yellow accessories. He has ten teeth on his upper jaw and nine at the bottom, his jaw is not hinged but rather moves up and down on a piston-like mechanism. In Five Nights at Freddy's World, Nightmare is completely black and grey, with a golden Hat and a Bow-Tie. However, in Five Nights at Freddy's 4, Nightmare also possesses a full (translucid-)black body aside of his accessories.

Adventure Nightmare is a playable character in FNaF World. You can get him by defeating him in the Pinwheel funhouse or the Glitched World and is one of the hardest characters to unlock. After unlocking Nightmare, the player can use him in their party.

Nightmare's role in the game FNaF World is to fight enemies with three other characters. He first serves as an enemy but will join the player once defeated in a random encounter. 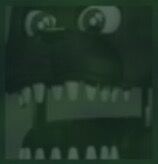 On a teaser. He is behind Nightmare BB.

Nightmare in the title screen

Adventure Nightmare in the Coming 2016 Teaser

Nightmare When being Fought