Withered Foxy is a unlockable character in FNaF World. He first starred in Five Nights at Freddy's 2 as an antagonist.

Withered Foxy's appearance is almost identical to his core series counterpart's, but he is smaller, tattered, and in even worse condition. He has a major tear on his chest, along with a few holes on his arms and upper legs. He also has a big hole at the left side of his head, which removes the fur off the left ear. The hole is much smaller than his core series counterpart, not reaching his eye holes.

He's overall stronger than Foxy for that reason the player might want to replace Foxy with Withered Foxy as soon as he's unlocked. Withered Foxy can be useful as most of his attacks (minus Hook.) function as an way to weaken enemies, rainy day to debuff their defensive stats and hot cheese for an lingering effect,eventually finishing them off with the Hook attack. Making him very effective if used in an phantom party or more, but deemed inferior by later party members.Although,W.Foxy does lose the ability of Jumpscare which Foxy originally has.There might actually be a possible team early on in the game where W.Foxy and Foxy team up(possibly with phantoms).

With (most) of the characters 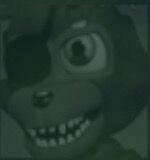 Foxy selected into your party?
Add a photo to this gallery

Withered Foxy in the "Update 2" teaser.

Withered Foxy in the second "Update 2" teaser.
Add a photo to this gallery

Retrieved from "https://five-nights-at-freddys-world.fandom.com/wiki/Adventure_Withered_Foxy?oldid=53205"
Community content is available under CC-BY-SA unless otherwise noted.