Five Nights at Freddy's World Wikia
Register
Don't have an account?
Sign In
Advertisement
in: HE Bosses, Pages, Enemies,
and 5 more

Unknown
Ball Boy is an enemy found in FNaF World HE (Halloween Edition.) While the halloween edition was a troll game created by Lolzhacks (in truth Scott Cawthon.) Ball Boy and several other enemies from the game got a reappearance in the actual game, as enemies found in Pinwheel circus.

In the Halloween Edition, Ball Boy bears a resemblance to Balloon Boy, with some new features: Ball Boy's hat, shirt, and propeller are only red. Ball Boy's balloon is green. His eyes are colored blue.

In the actual game, Ball Boy looks almost identical to Balloon Boy, with some minor changes: Ball Boy is much bigger than the playable characters. He is about the Puppet's size. Ball Boy still has a red propeller. Instead of holding a balloon, Ball Boy juggles balls.

Halloween Edition - Ballboy is the easiest enemy in the game. Functions as the game's "slime."

FNaF World - Ballboy is a regular enemy and is reasonable easy to beat with a good party, however, it can be a damage sponge if you encounter it before going through the sub-tunnel in Deep Metal Mine.

To act as a enemy and to kill your player and stay alive. 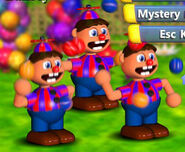