There are many different possible endings that can be achieved in FNaF World. All but one of them awards the player with a trophy.

This ending is unlocked through normal Gameplay in Normal Mode. After getting the Key and unlocking all the security gates, the boss Security stands in the way. Upon defeat, the player can finally enter the tent behind it. However, upon entering, the player is then mocked by a voice for beating an imaginary enemy in an imaginary game on the easiest difficulty. The game ends here, implying something lies beyond the tent on a harder difficulty.

This ending grants the Security trophy on the file select screen.

It was fun being the puppet master, but now I grow weary. It's time to put you in your place.-Scott Cawthon before the battle.

To reach this ending, the player must play normally through the game, except in Hard Mode. After defeating Security and entering the red tent, unlike the other ending, the player is transported to a cut-off area of Fazbear Hills. At the end of the path is a portal which leads the player to the true final boss of the game, Scott Cawthon himself, taking the form of his now synonymous avatar.

Upon defeat, Scott chastises the player for their actions, saying he did nothing but give more and more games to the player to appease their insatiable appetite for more games and his repayment was for them to kill him, the storyteller. He then explodes into a cloud of pixels and the words "THE END" appear on the screen, hinting that this is the true or final ending by putting it in uppercase, unlike other "the end" endings which are in lowercase.

He can be easily beaten by correct use of chips and bytes, with at least 2 or 3 characters having "gift boxes" ability. Byte - "boss drain X" is a must.

Upon completion of this ending, the Scott Cawthon trophy is added to the file select screen.

This ending is unlocked when you go down to more than three glitches. This is achieved by going to the glitch after the Bubba fight and proceeding as normal until the player reaches the third Sub-Tunnel. The player must then go up, right, up, and right until they reach a corner. Pressing down here will reveal a false wall which leads to another glitch. In the fourth Sub-Tunnel, there is just a man, a lake, and a bunch of trees. Talk to the man, whose name is Old Man Consequences. He tells the player that they have gone too far down into the code and they are stuck here with no way out. He offers to fish with him before a simple "the end" appears in the text box.

Upon completion of this ending, it grants a trophy of the Freddy Fazbear sprite that appeared in file select screen.

This ending is found in a similar fashion as the Fourth Glitch Ending, with some minor changes at the end. First, proceed to the Fourth Glitch. Then pace back and forth above the lake. The Freddy sprite should begin to shift closer and closer to the lake before eventually falling in. Hitting the arrow keys back and forth will cause Freddy to struggle until he goes completely under the water. He will then be shown falling in the middle of a black screen. After about two minutes, the screen will cut to a figure who seems to have their back to the player and arms around two others. The background will flash many colors and stay like this until the player closes the game via task manager, or presses "F2" to restart the game.

If the player hasn't gotten the Fourth Glitch Ending trophy yet, they will receive its reward if they complete this ending first.

This trophy can also be obtained in this game by performing actions in Ultimate Custom Night. By visiting Old Man Consequences in Ultimate Custom Lake (by setting OMC to a difficulty of 1 and using the Death Coin on him) and drowning in the lake, identically to the drowning ending, this ending's trophy is unlocked in FNaF World.

To get this ending, the player must meet up with the Fredbear NPC while having Fredbear as your party leader. After the dialogue begins, the background will go black and the two will cock their heads to the side, as if they are short-circuiting, while text explains that the universe cannot have two Fredbears existing in the same place at the same time. Afterwards, their entire upper bodies will explode and the words "Universe end" will appear on the screen.

This ending can be easily obtained by starting a new game in Fixed Party Mode and setting the blue 1 party marker on Fredbear. Then the ending will occur in the first cutscene of the game.

Getting this ending earns the Fredbear Legs trophy on the file select screen.

You haven't seen the last of me. Freddy Fazbear isn't the one who will be sharpening his teeth on your bones. It will be me. It will be me...-Chipper's Revenge after his defeat.

To reach this ending, the player must first travel to the most northern area of Choppy's Woods, accessed through Lilygear Lake. If the player keeps traveling west, they will eventually come across an entrance to the Mysterious Mine, located at the top and center of the map. On the lower-left portion of the map, a small hallway can be seen jutting out from the mine. The player must navigate the dark maze to reach this spot. From the map, it looks as though a false wall or keyblock is there, so it may require the key before being able to fight the boss. When the player enters this hallway, it will set off some kind of switch that triggers the fight, though this might have just been a keyblock.

The boss himself, Chipper's Revenge is quite powerful, capable of taking out even the highest leveled animatronics in a single hit. In Hard Mode, he even sports the 4th Wall attack, which can cripple the entire party in one shot. It is highly recommended the player take in multiple characters capable of using Gift Boxes (such as Crying Child, Funtime Foxy, and RWQFSFASXC).

Same strategy for defeating the Scott Cawthon boss may be used for Chipper, but is more difficult.

Upon defeat, Chipper bemoans his franchise's fate, speaking of how players would rather be scared by the Five Nights at Freddy's franchise. He swears to return one day before deactivating.

Upon his defeat, the Chipper's Revenge trophy is earned on the file select screen.

This ending is unlocked by gathering all the clock pieces and solving their puzzles. To do this, first, any time the player speaks to the storyline Fredbear, they must must go through his dialogue until the "DONE" button appears. Do not click it. After staying idle for a few seconds, Fredbear will transform into his 8-bit form and allude to darker things. Follow these steps to the letter:

The figure with only two small yellow eyes that is seen when starting up the game for the first time tells the player "We are still your friends" and "Do you believe that?" similar to the ending cutscene of FNAF 4. It goes on to say that "the pieces are in place for you", and that all the player has to do is to find them. It then tells the player to rest, before disappearing. A pixelated "the end" appears, and will go away if the player presses the Esc key, or the "F2" key.

Upon completing this ending, the Crying Child trophy is earned for the file select screen

You cheated! And besides, didn't your mommy tell you that you can't kill a rainbow?! The next time you see a rainbow in the sky that is me, comin' to your houuusssseee....|Chica's Magic Rainbow

After beating the game at least once, the player needs to enter Desk Man's house. After talking to him, Fredbear will appear outside his house. Fredbear will become depressed, telling the player how someone has gone insane, that it is impossible to get to him, and that the player should quit the game. But, if the player wishes to continue, they should get secret characters they were never intended to have in the Halloween Update Backstage, before opening a portal.

The Halloween area lacks enemies and only contains characters and portals to strange spin-off minigames. Several characters' code is being used for the minigames and beating a minigame will unlock a character while beating a minigame under certain conditions will unlock other characters. When the player feels confident enough in their party, they can travel through another portal to Geist Lair to challenge yet another final boss, Purplegeist.

However, when challenged, PurpleGeist gets crushed by Chica's Magic Rainbow(Character), a character from a minigame with the same name. The Rainbow gives the player three minutes to defeat it while it charges its Rainbow Cannon, which results in an instant Game Over.

Upon defeat, the Rainbow calls out to the player to say that they cheated and tells they they can't kill a rainbow. Afterwards, the player is redirected to the Desk Man's house, who tells them that he's impressed that they have beat the Rainbow. Then, he mentions a new creation of his, named "Baby", and that it's too late to stop her. The lights turn off, and two glowing yellowish green eyes appear in the dark, speaking "The show will begin momentarily. Everyone please stay in your seats." When the lights turn back on, Desk Man is found dead, head on his desk, with blood pooling around him. The screen fades and the words "To be continued" appear before credits begin to roll.

A trophy of Chica's Magic Rainbow is obtained after the credits. 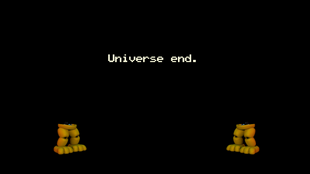 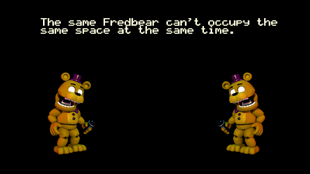 What happens if two Fredbears collide.

Glitching animation (only appears if the player's party leader is also Fredbear).

Fredbear's legs as a trophy.

Fredbear's legs (happens after both Fredbears blow up due to the Universe ending). 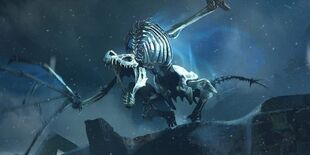